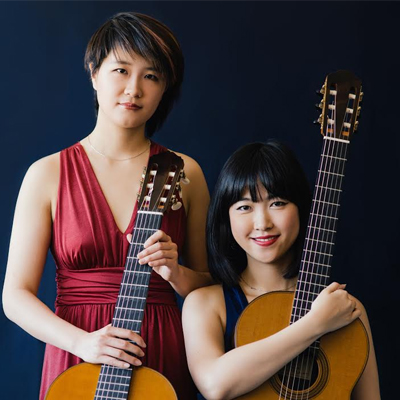 Praised by the distinguished Classical Guitar Magazine as “having the star potential to serve as inspiration for new generations of guitarists to come,” Beijing Guitar Duo made their New York debut in Carnegie Hall in 2010, launching their international concert career. Their debut CD Maracaípe received a Latin Grammy nomination for the title piece, which was dedicated to them by renowned guitarist/composer Sergio Assad.

The Beijing Guitar Duo has performed around the world in halls such as the Concertgebouw, Palau de Musica, Tchaikovsky Hall and the National Theatre in Beijing. This season will take them on a 12-city concert tour in the United States in February as well as other performances in Europe and China. The duo regularly collaborates with orchestras, in ensemble with flutist Marina Piccinini, guitarists Grigoryan Brothers, and with their mentor Manuel Barrueco, touring in North America, Europe, Australia and Asia.

In addition to concertizing, the duo shares a love for teaching, which brings them to major conservatories all over the world for masterclasses.