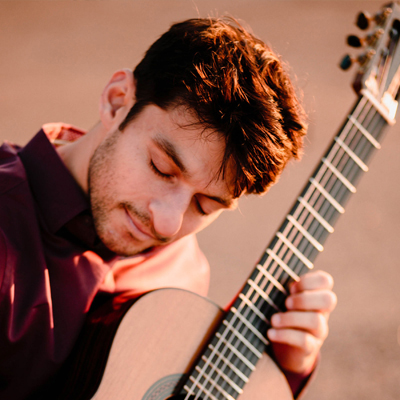 Jack Cimo is known for his powerful stage presence, beautiful tone, and exciting renditions. “I have heard many fine guitarists in concert which I have found to be beautiful. This was beyond beautiful. One was totally unaware of Cimo’s stellar technique because his music cut immediately to the soul. I was breathless.” (John Howard, DMA) Jack frequently plays with orchestra, most recently playing the “Concierto de Aranjuez” with the Santa Maria Philharmonic. He was recently one of two Americans to be invited to the prestigious Joann Falletta International Guitar Concerto Competition in Buffalo, NY. Conductor Jane Brown has said of his playing, “Mr. Cimo plays with expressive depth, great feeling, and brilliant virtuosity. His performance of the Rodrigo ‘Concierto de Aranjuez’ was a season favorite that our audience and musicians are still discussing in appreciation and awe.”

Jack has embraced bringing guitar to new audiences around the globe. He has done multiple tours along historic Route 66 and played everywhere from art galleries to concert halls such as the Harris Theater in Chicago or UNM’s Keller Hall. He recently organized and performed in a major benefit concert for the community of Paradise, California, and has done performances to aid the Standing Rock protesters and cardiac care patients in Chicago. His recent album Jack Cimo Plays Bach, Bogdanovic, Walton, and Arnold has earned accolades. Composer Dusan Bogdanovic said of the recording of his piece, “It’s terrific! It’s definitely the best recording of the piece, very inspired, precise and expressive.”